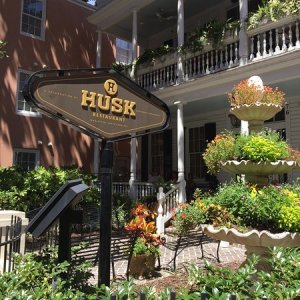 “If it ain’t Southern, it ain’t coming in the door,” – Sean Brock

Brunch, lunch or dinner, Husk delivers every time. Make a reservation and get in there anyway you can, you won’t regret it.

My expectations of going into Husk was one of excitement, but I was more than a little apprehensive about how good the food would actually be. The novelty of Husk has surely faded, the limelight and praise from magazines and Sean Brock (the owner) being on Anthony Bourdain’s Parts Unknown is a thing of the past.

There are also four locations now. Four locations? Doesn’t that make it a chain restaurant? Won’t that dilute everything?

Going in I thought sure, this will be fun but not mind-blowing. It would be yet another solid Southern restaurant.  Sometimes, it’s hard to live up to the hype. Sometimes you’re just not sure what all the fuss is about … why so many people are talking about it. If you are like me, you can build something up in your head that can never live up to reality.

I really wanted to like Husk, but as I sat down and waited for my food to arrive I was waiting to be disappointed.

Walking up to Husk you see a two-story white home that looks  something like a colonel era hotel. You can imagine Rhett Butler drinking a mint julep and smoking a cigar on the second story balcony .  As you walk through the black iron gates, a towering magnolia canopy looms overhead. Making your way to the doorstep you pass a small garden and fountain brimming with flowers. You are quickly transported to another era. It’s quintessential Charleston in every sense of the word.

The inside of the house is open and welcoming, with beautiful pine flooring, fireplaces, and multiple rooms for people to dine. It’s rustic, yet charming.

The chalkboard at the bottom of the staircase lets you know who the good folks are that are responsible for what will soon be on your plate. Local farmers and fishermen (add more here)

On the surface, Husk is everything southern … an establishment with a passion and zeal for selling the romantic south, hard.

Servers are dressed in denim shirts with full-length grey aprons.  I can’t speak for dinner, but during our brunch, the atmosphere was calm and pleasing.

We were seated upstairs but inside as it was cold on the day we went.  However, when the weather is nice and warm there is a patio balcony where couples can dine outside.

The great thing about Husk is that their menu is always changing so you can have a different experience each time you go. The changes with what the region’s producers provide daily, but there are some rules about what can go on the plate. If it doesn’t come from the South, it’s not coming through the door.

Our weekend in Charleston was a celebration of Valentine’s Day and my birthday. And if you know me, I like to make a big deal out of it every year. My wife has kindly obliged me on this over the years, and with every activity and restaurant planned she strived to make it especially, special. When she made the reservation, she let Husk know it was for my birthday, and they took it to the next level. We live in a society that loves customization, and it no more present than in the South where anything that can be monogrammed, is monogrammed. Another perfectly Southern touch that didn’t go unnoticed was this happy birthday at the top of the menu.

Bacon and bloody mary’s are a dime a dozen, but have you tried prosciutto? Down home Southern and elegance is felt throughout the establishment and the theme continued with the food. The salty brine of the prosciutto married with the picked jalapeño and fresh tomato mix made this for a smooth intro to the meal after a night of sipping wine with my wife. 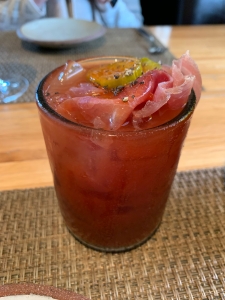 The true testament of another Southern restaurant is biscuits and gravy. You can’t survive without a solid ode to this classic brunch dish. The ultimate test of good biscuits and gravy – the need for a nap shortly there after. It was a long 3 hour drive home to Charlotte. Fresh-made biscuits were doused in a well-balanced gravy that had the perfect amount of heat. Another sign of great gravy, you find yourself embarrassingly scrapping the bowl for every last drop.

Fall off the bone, finger licking good is the sign of a good sparerib, but this was an exceptional spare rib. Admittedly, I wanted more. The sauce tasted like a sweet crime, I wanted to commit over and over again. The field peas with their earthy and unassuming presence brought me back, making a true balance of the dish. I am licking my lips as I write this, as I could go another round here and now. 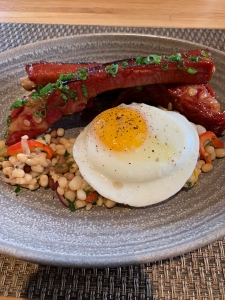 I am a born and raised Southern man, and wasn’t raised on the finer side of the street so cheap and delicious pork rinds were a staple of life – any road trip, you could bet a stop at the gas station for a bag was in tow. So here I am, thinking how can you make pork rinds fancy? Well, shit you add some Mexican chocolate and it was a whole other world for me. First, these pork rinds were so fresh out of the frier that they were cracklin with every bite. My wife and I kept giggling as we crunched down on each one. This was truly a match made in heaven, I never knew could exist. That’s the very magic that Chef Brock brings to the table.

My wife, who’s a bona fide foodie and spent 8 years of her life rubbing elbows with top chefs in a former career, including Sean Brock, exclaimed “It tastes like a breezy summer morning. The dish is innocent, like a young child smelling fresh strawberries in the field for the first time. The basil brings the sophistication and ricotta the balance.” Now let me tell you, my wife rarely selects sweet dishes over savory, but the pull from this one was much too tempting and she happily caved in.

It’s hard to live up to the hype. It’s easy to coast on trendy sentiment and romantic Southern culture, but Husk was everything I thought it would be and more. From the creative menu, to the ambiance to the food itself, it blew me away and we can’t wait to go back.

The New South is Here